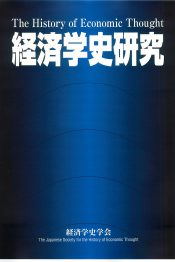 This paper seeks to examine Takuya Hatori’s research on classical economics, clarify his main ﬁndings, and appraise their intellectual and historical signiﬁcance. Hatori’s personal history as a scholar of classical economics was largely divided into two periods based on the differences in the objects, methods, and results of his study. In the ﬁrst half of his research activities, he addressed the problem of the relation between bourgeois revolution and mercantilist economics to illuminate the historical meanings of classical economics. Following Yoshihiko Uchida’s suggestions, Hatori grasped the mercantilist period in England after the Glorious Revolution of 1688 as a kind of social and political crisis of the country and identiﬁed the role of Adam Smith’s economics as presenting the solution to this crisis. Hatori went on to focus on the classical theories of capital accumulation and argued that classical economics was formed historically with economists’ visions growing and changing by way of recognizing the civil and civilized development of the capitalist economy.

In the latter half of his life, Hatori devoted himself to analyzing the theories of classical economics. He spoke of “a working hypothesis which should be positioned as the starting point for our work” and claimed that classical economists presupposed “pure capitalism” when formulating and presenting their economic theories. According to Hatori, Smith, Malthus, and Ricardo all struggled to solve “fundamental problems” owing to this supposition about pure capitalism. In his study of Ricardo’s theory, Hatori argued that Ricardo maintained the theory of absolute value and grasped rent as a nominal value. Indeed, through a detailed investigation of the documents in the Works of Ricardo, Hatori may have even become the ﬁrst scholar in the world to criticize Piero Sraffa’s interpretation of the corn-ratio theory.

It is difﬁcult to speculate as to why Hatori, in the latter half of his career, changed his approach to the study of classical economics. It appears that he gradually liberated himself from the inﬂuence of Uchida and felt more afﬁnity with the economics of Kozo Uno. As the background of intellectual change, we might refer ﬁrst to the success of Japanese capitalism without realizing the ideal of “civil society” and second to the “student protests” in the late 1960s.